History of the Bulgarian Fulbright Commission

Leave us a message

In September 1945, in the wake of the horrors of World War Two, Senator James William Fulbright (D-Arkansas) introduced a bill establishing an international academic exchange program to be funded through the disposal of U.S. wartime properties in Europe. The bill passed without debate and was signed into law by President Truman on August 1, 1946. Educational exchanges were consolidated during the presidency of John F. Kennedy under the Mutual Educational and Cultural Act of 1961, introduced by Senator Fulbright in the Senate and Representative Wayne Hays of Ohio in the House. This law, still operative today, is known as the Fulbright-Hays Act. Its main purpose is “to enable the Government of the United State to increase mutual understanding between the people of the United States and the people of other countries by means of educational and cultural exchange; to strengthen the ties which unite us with other nations by demonstrating the educational and cultural interests, developments and achievements of the people of the United States and the other nations, and the contributions being made toward a peaceful and more fruitful life for people throughout the world; to promote international cooperation for educational and cultural advancement; and thus to assist in the development of friendly, sympathetic, and peaceful relations between the United States and other countries of the world.” 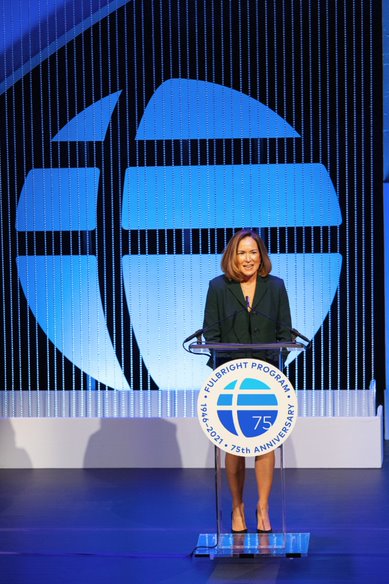 Today, Fulbright is the most widely recognized and prestigious international exchange program in the world. Over the past seven decades, the Fulbright Program has enabled more than 360 000 people to participate in the Fulbright exchange. The Fulbright Program awards approximately 8,000 grants annually, seeking out individuals with potential who represent the full diversity of their respective societies and selecting nominees through open, merit-based competitions.

The Fulbright Program is administered in the United States by the Bureau of Educational and Cultural Affairs to the United States Department of State through cooperating agencies, such as the Institute of International Education (IIE) and the Council for International Exchange of Scholars (CIES). The J. William Fulbright Foreign Scholarship Board (FSB), which consists of twelve presidentially-appointed members, provides policy guidelines for the educational exchange. Overseas, the Fulbright Program is administered in 50 countries by binational commissions which implement the principle of binationalism strongly emphasized by Senator Fulbright himself: “I had not wanted this to be solely an American program… In each country, binational commissions were to develop the kind of program that made sense to them – what kinds of students, or teachers and professors, should be selected, what kind of research work.”

The primary source of funding for the Fulbright Program is an annual appropriation by the Congress of the United States. The Congressional appropriation for the Fulbright Program in fiscal year 2015 was $236 million. Participating governments, foundations and host institutions in foreign countries and the United States also contribute financially through cost-sharing and indirect support.

The primary source of funding for the Fulbright Program and Commission in Bulgaria is an annual US government allocation of approximately $600,000 and since 2009 an annual Bulgarian government contribution of $140,000. The America for Bulgaria Foundation has generously supported the expansion of the Bulgarian Fulbright English Teaching Assistant program since 2010.

The main function of the Commission directly derives from the goals of the Fulbright Program worldwide and consists in administering the exchange of Bulgarian and American scholars, students, teaching assistants and professionals and providing educational advising about opportunities for study in the U.S.

View/Download
Newsletter archives
We use cookies on our website to give you the most relevant experience by remembering your preferences and repeat visits. By clicking “Accept All”, you consent to the use of ALL the cookies. However, you may visit "Cookie Settings" to provide a controlled consent.
Cookie SettingsAccept All
Manage consent

This website uses cookies to improve your experience while you navigate through the website. Out of these, the cookies that are categorized as necessary are stored on your browser as they are essential for the working of basic functionalities of the website. We also use third-party cookies that help us analyze and understand how you use this website. These cookies will be stored in your browser only with your consent. You also have the option to opt-out of these cookies. But opting out of some of these cookies may affect your browsing experience.
SAVE & ACCEPT